Teaching 40K: Into the Fire

Entering 40K can be a bit overwhelming, so here is a little tutorial to get things rolling.


Mr. Black here, and over the years I've taught many a newcomer the game of 40K, and over that time I've developed a little scenario I use most every time just to show someone the basics of the game.

The overall point is to accomplish the following:

1. Show them a snippet of how the game is played.
2. Introduce them to a variety of units and how they interact.
3. Prove just how cool these little plastic army men are.

Given that, I've created this little mini-scenario to ease someone into the basics of 40K, similar in design to the old Battle For Macragge and Assault on Black Reach! starter rules, except I've thrown in a bit of a narrative to spice things up a bit. Of course this isn't a stone-set scenario, as we all know things don't always go to plan, but if the events happen to take a left turn from the initial plan just roll with it!

For the Purposes of the following scenarios I usually use half a standard  table (36 x24).

"The Forces of Chaos have launched a sudden assault on the sector, under your control are the last remaining members of Tactical Squad Invictus. Survivors of the initial battle they have fallen back to a safer position to await reinforcements, but the legion of the Chaos Gods is not far behind... 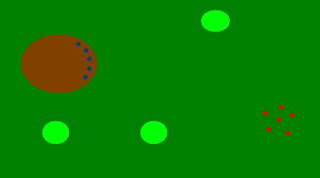 The Space Marines will be held up on the hill (brown), sparse forests dot the landscape (light green), allowing the Chaos Marines some avenue of cover as they advance from the devastating effects of the Plasmagun.

This initial scenario should be used to demonstrate how basic movement and shooting works, as well as basic mechanics of armor saves (or in the case of the Plasmagun, lack there-of). Usually I ignore the Get's Hot! rule for this, as having the weapon blow up on the first shot is not cinematic when its in the hero's hands. We're also trying to minimize the lesser rules since, again, this is an introduction.

The Chaos Marines should move forward and then run in the shooting phase, all in an attempt to get into melee with the last remaining Space Marines, who in turn will be mowing them down with gunfire. This is to be expected, and is the actual point of the scenario: let the new player feel the power of Space Marine weaponry, being sure to explain how Rapid-Fire weapons work and reminding them should the Chaos Marines draw close enough. Should the Chaos Marines actually get into melee, then so be it- Show them how close-quarters-killin' works!

Tactical Squad Invictus has managed to quell the scouting Chaos Marine party, but it seems far worse threats have moved over the horizon; the legion moves closer, more heretical followers of the Chaos Gods march forth, bringing with them their machines of war. 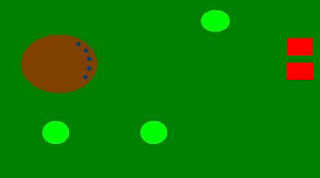 The Rhinos will move up turn one, giving the Space Marine player a demonstration in vehicle movement speed as well as how different Strength weapons interact with Vehicle Armor (aka the Bolter doing exactly nothing and the Plasmagun having a decent chance to do something). Should the player Wreck or Immobilize a Rhino all the better! Again, the initial turn should show how well protected the troops inside actually are compared to their now-dead comrades before them. If you're like me, also talk about how dangerous the Chaos Marines inside are, and instill a sense of dread over the player not being able to stop the full tide as it sweeps forth. Making sure they do not arrive is necessary for survival!
Turn 2
"The thundering sound of jets echo through the air as the marines of Assault Squad Calidus arrive to reinforce their brethren! Combining speed with the devastating close-combat prowess only the Assault Company can bring they move to intercept the oncoming Chaos hordes! 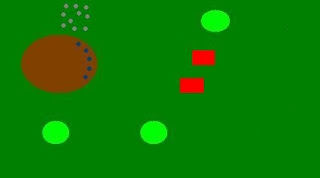 Now the Space Marine player has the chance to launch the offensive and really have some combat fun! This also does a good job of introducing Jump Infantry and how they work to the player, and with their sheer number the player should get a sense that the role has switched from offense to defense. Sure, they still have to deal with the Rhinos, but now that they have a Meltagun this should prove little issue, plus it allows them to see the penetrating power of the weapon itself while still being able to assault the units inside. They should lose some casualties in melee, but other all it should be an easy win for the marine player.
Part II: Resurgence
"As both armies march to the fight Tactical Squad Invictus and Assault Squad Calidus man the front lines, but Chaos cannot be stopped so easily, and now the main bulk of the Chaos incursion move to destroy them... But the Imperium is far from defenseless..."

Tactical Squad Invictus has been reinforced and is now brought up to a full ten marines strong, and any casualties that befell either squad have now been restored. 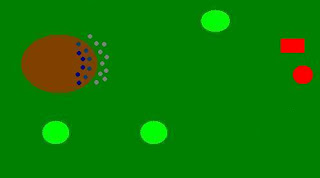 The Defiler is a big and scary model in it's own right and this should be expressed to the Space Marine player, if not already apparent... Don't worry too much, one shot from the Battle Cannon and they will see the immediacy of it's threat. Luckily they have acquired the use of the Lascannon and can use that to their advantage, also taking into account the Plasmagun as well as the Meltagun from the Assault Squad. Here you give the player a taste of target priority- What do they shoot at? The oncoming Chaos Marines or the large and deadly daemon vehicle coming at them? Overall the threat isn't as scary as it could be and it introduces Cover Saves into the game, as well as how walkers function.

Turn 2
"Gun fire heralds the arrival of further reinforcements, this time the aid coming in the form of Brother Galius, who's shattered body is now protected within the steel frame of a mighty Dreadnought. 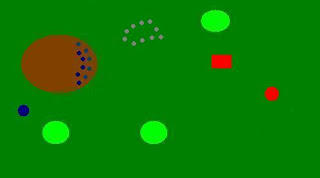 Really the overall threat to the Space Marines is low, they have massive amounts of fire-power at their disposal to take down both the Defiler and the ten Chaos Marines, just be sure to take it a bit easy as, again, this is a learning game, it's supposed to heavily favor the new guy while still giving him a challenge. By this point the Assault Marines may even have killed the Chaos Marines, if not then take a turn or two more to fight it out, until the Chaos Marine forces begin to dwindle a bit.


Turn 3 (or later)
"The battle seems to be turning in your favor: The Traitor Legion's number dwindle and your blows reign heavy upon them... But the tide of battle can turn swiftly, and with a raging howl the very fabric of reality tears open as Chaos Terminators teleport onto the battlefield, their ancient armor decorated with the skull of past victims. 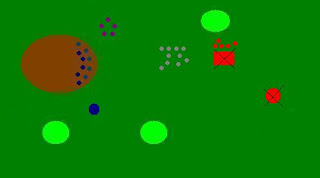 The Chaos Terminators pose a serious threat to the troops of the Space Marine player and by this far in the demonstration they should have a good grasp over each units capabilities and strengths. That being said don't feel bad about decimating a squad with the Terminators just to show how dangerous they really are! This is the last leg of the tutorial, the "boss fight" if you will! Make it challenging, make them worry about their odds against such a powerful foe (and keep in mind to yourself that the Dreadnought can wreck them completely... So don't Deep Strike them too close).

In the end the Space Marines should emerge triumphant, as the old edict goes when teaching someone a new game system "Let the newbie win!" You don't want their first experience to be a crushing defeat- You want it to be a glorious victory in the name of the Imperium! You want them revved up at how their band of little plastic army men totally annihilated your band of little army men (of course it close! In true Space Marine faction they snatched victory from the jaws of defeat!).

The final scenario was close to 500 pts. on each side and over the course of all the games they learned the basics of vehicle and squad movement, as well as shooting and assault rules. Hopefully from there they can choose exactly which aspect they liked best for when they make their army- presuming they decided they liked the game in the end. But really, after such a climactic battle of sheer awesome, who could say no? And that's the point in the end isn't it? Pull them in and make them want more!

~Just remember that the initial delve into the game will leave a lasting impression on players! You want them to think this is the coolest thing since the invention of the Chainsword, so talk it up, make it bigger than life, and most of all remember: FOR CHAPTER AND EMPEROR!  So how do you like my scenario, and how do you bring newcomers into our glorious hobby?
Posted by Mr. Black at 8:05 AM