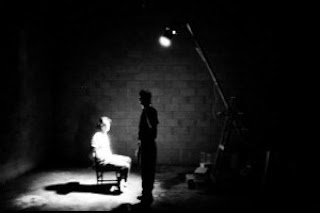 Yes, someone willingly went into a dark room alone with Mr. Black.

Mr. Black here, dear readers, and this week I sat down with one David Finn and his wife Tanya Finn, an Irish couple who for the past four years have successfully operated their own game store and cafe': Gigabites Cafe, located in Marietta, Georgia; a rare feat in this day and age of recessions and failed businesses. They have done so well, in fact, that just this month the couple finalized the move-in to their new store location, effectively tripling the space available as well as expanding the business exponentially.

What is their key to success? What does it take to reach such a level of success in what many (including myself) consider a dying store-breed*? Well let's sit down for a chat and see if these questions get answered...

**Note: When I say "dying-breed" I mean specifically that in this day and age I believe game stores as a whole are on the decline, myself personally witnessing three being closed in my time. It's a sad fact, but one I believe to be true.

So then, let's begin. 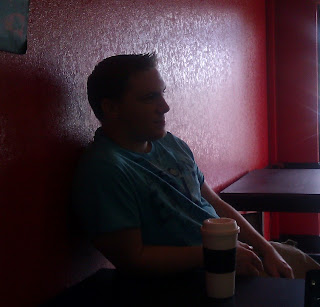 Name: David Finn
Age: 27
He requested the low-light as to not expose his face... In reality I think it was just so he couldn't see me clearly from across the table.
Mr. Finn sits across from me, sipping his coffee as he keeps an eye on the front counter, another worker of his, James, maintaining the front is a busy hustle of making sandwiches and smoothies, elsewhere in the store, the usual Friday afternoon crowd is starting to come in, consisting of Warmachine players, 40K and Fantasy aficionados, and the  assorted Magic: The Gathering players.
So, let's ease into this. What is your occupation?
"Gaming Expert and Fun Facilitator... I like the word facilitator, it makes me sound fancy. Oh! No, "Local Pikey", I like that.
I think that may be a derogatory term but... Well it's alright if you use it, right?
"Yes, it's OK if I use it... Well, not really, but I'm calling myself it, so it's alright."
Sure, sure.
Mr. Finn, for those who can't hear him over the internet, has a semi-thick Irish accent, the kind that you instantly recognize and call "Scottish" if you don't know any better but isn't so thick as to interfere with his normal speech. His personality is one of levity- obviously a people person, the kind you have to be to be in retail sales.

It is also worth noting David, an avid tournament attendee, has won more Sportsmanship awards than most anyone else I know combined. I don't know if that's due to him just being a "likable" guy or just speaks of the kind of people I usually associate with...
Let's just go right into the questions, as we have a lot to cover and not so much article to cover it with. You just recently expanded to a new size store, upgrade and everything, and are considered one of the highest profile gaming stores  in Georgia. What do you have to say about that?
"Um...Er... I don't know...I guess we did it all for the people."
You don't really believe that do you.

"Yeah I do! I could have stayed in the smaller store, but people wouldn't have had as much fun. It was definitely for the customers and for the people, definitely not the business... Definitely."
Of course it was. What do you consider the pitfalls that some stores face, since so many just don't make it?

"They treat it like a hobby, not a business. Don't get too high on your own supply...too much..."
So how many armies do you have?
"... .... ...(Finger counting)...Five fantasy armies, sorry, six...Ogres.. Three 40K armies, there is an Imperial Guard army sitting around here somewhere... One Dystopian Wars, one Warmachine, one Hordes, one Infinity, one Malifaux, one Uncharted Seas, one Lord of the Rings (I laugh at that) and... Lots of magic? Hmm, what other games do we play here? Oh! Pulp City! Poor poor Pulp City...
Well, that's a lot... Most people would consider that an unhealthy amount. Your retort?
It's all for teaching. Business expenses... I can stop anytime I want... Oh! And one Brushfire army.
... ...Stop anytime you want, eh?
"It's true."
...Sure. Alright, favorite and worst game systems and why?
"Fantasy. It's superior. The rule-set is superior and it is not a dying game....No codex creep, every army is balance, aside from woodelves- heh heh heh... So, worst game system... (thinks)... I don't really dislike any system... I'd have to say that my least favorite right now is actually 40K...Just for the rules right now, I love the background*.
*He owns most every Imperial Armor book, three framed 40K paintings, and his birthday cake last year was a Dark Angel with "Never Forgive, Never Forget." across the top.
They usually refer to game store owning as "The Widow's Career"...or at least they would if game store owners were married. You, a rare example, seem relatively well adjusted, as well as married. What gives?


"I die a little inside every day...Someday I'm just going to turn to dust...Also, the secret is to hate everyone that comes to your store...(he laughs). Of course I don't mean that... Much...Copious amounts of coffee help, though."

Weirdest thing you've seen as a store owner?
(Thinks) "We did have a group of Furries come in once... That was kinda odd... Oh and there was this one group that came in dressed as princesses then just walked out one time...Oh! Oh! And we had a baby that was conceived in our bathroom once (laughs), long story behind that one, but that was the old store."
You do know this is going to be on the internet right?
"I'm sure there are Furries all over the internet."
Well, yes, you are indeed right about that, as a big part of my job is browsing Google Images for... Research purposes...
"Yeah, if you could not do that here..."
Moving on. What is or was the weirdest kind of gamer to you?


"The ones that always talk in character...Oh yeah, those are just the weirdest..."

Employee: What? there is nothing wrong with that.
"No, out of a game you shouldn't be talking like "Baron Von Shill". "


Employee: There is nothing wrong with that.
"Get back to making sandwiches (he says, laughing as he facepalms)."
Worst kind of customer?

"Oh! The creepy ones that follow me around and don't say anything (turns to patron sitting next to him, who has been silent the whole time). No, not you. You say stuff... Oh! Or the ones who stand in complete silence then just start talking about random stuff... Creeps me out... And gingers. (turns to patron- a redhead) That ones for you (winks)."

Noticed a lack of gingers around here, congrats. What is your biggest struggle?
"Customer loyalty. Something we work on every day is getting people to realize that only by supporting the store do we stay open. It's all well and nice to buy online but if you don't have anywhere to play then it's a bit pointless now isn't it? You're in a game store to hang out-(sees customer walking in parking lot) Oh damn, this ones weird too... Err, you're here to be social with your friends... It's like a night club for gamers."

"... ..."
So, what have been your proudest and worst moments?
"My proudest was probably opening the new store. it's a sign that we've "made it". Worst moment was when I realized I owned a gaming store (laughs)...Ehh, there's a few, it's a struggle sometimes. Paying the wages is my own weekly worst moment sometimes... Oh! And I always feel pretty bad when I miss someone's order. That sucks."
Speaking of which, did my-
"Don't ask me about those Nezumi Chem Heads; they're out of stock."
Sure they are, sure... What are your hopes for the future?

"We need to become the biggest and bestest game store in Atlanta! And carry a full range of EVERY game!"

So, total control of the gaming content in the state?
"Of course!"

Aim high. I can respect that.
"Aiming low knocks your opponent down faster, however." 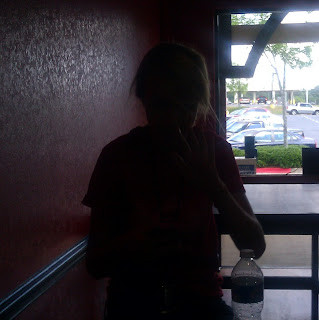 Name: Tanya Finn
Age: (I got leered at when I asked)
She requested the blackout because she didn't want me having a picture of her. I have known her for nearly five years now and she still refuses to trust me in most any aspect- She is a smart girl.
Tanya, your opinions of being a game store owner wife/co-owner?
"Um... I love it, it's the best experience of my life."

I'm sensing a bit of sarcasm?
"Not at all! It's interesting, you get to meet a lot of new people, a whole new world I knew nothing about. It's fun, and the people that play are nice and I think it's a very good hobby to have."
Best and worst memory/experience?
"I guess opening the new store, the amount of people that came in would be the best. Worst? Nothing has been "bad", but weirdest? I guess the LARPing. Yeah, the first time people came in dressed up... But now that's not even that usual, not that I've seen them again. I guess everyday is new and unusual- something new happens every day."
What games do you play?

"Mind-games. (smiles) Just mind-games. But back when we had computers I joined in those."

What opinions of yours have changed since Year 1?
(Laughs and hangs head) "I'm much more open minded and more liberal towards... Well things I never knew existed... Like Furries."

You guys are really stuck on the Furry thing.

(Tanya to David): "You said that too?" (David) "Yep."
Right then. OK, to the two of you, any final comments or things you wish to say?
"I think... I love it and I love that people have a common place to hang out. And it creates lifelong friendships with people they otherwise wouldn't have. I think the gaming community is a great community that sticks by each other and some of the best friends that we've made since we moved to America.. And I encourage you to come to Gigabites and spend lots of money (smiles)!
"... ...I'm kidding about that last part... Don't put that in."
Oh I won't, don't worry... And you, David, any final comments you wish to say?
He sits there, just shaking his head with a smile at the comments his wife made. He sighs and reclines his head, trying to think of something perfect to end on.

The moment holds as he thinks, I am beginning to get bored waiting.

He notices me still typing, despite him having said nothing for nearly a full minute or so.
"Are you just typing everything I do?"
I continue typing as he moves across the table to see what I've taken down.
(Crosses arms) "Stop that."
Your answer?
"Just remember it's all a game- Just have fun with it!"
"No, it's not "just a game", it's a way of life, David. That's what we're building here at Gigabites!
"You know he wrote that."

Tanya gives me an annoyed look as David places his head in his palm, shaking his head.
And with that I concluded my interviews, having gathered a small insight into an often overlooked part of our hobby- the humble Gamestore Owner. All in all I do wish Gigabites success in the future and encourage anyone in the Marietta/Atlanta area, as well as anyone visiting Georgia, to stop by and partake in the large amount of gaming going on seven days a week, as well as a great menu of food, fresh-cooked to order.
How many other Gamestores can boast that they offer that? But perhaps, most importantly, is that if you stop by you can meet your Internet Hero himself- Me.
Until next time, dear readers. 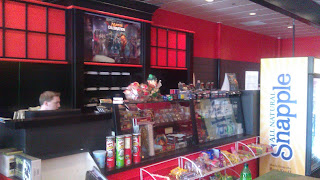 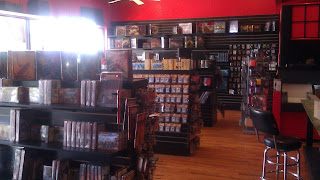 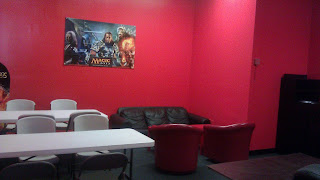 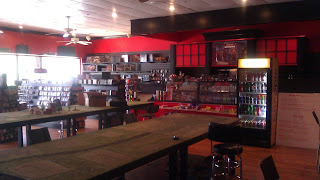 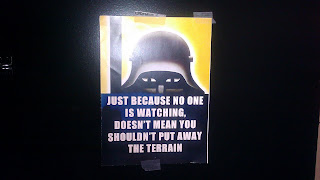