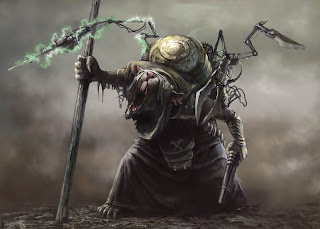 We've been leading up to it, and today, from Eshin to Pestilen, we're taking a look at Skaven at the 2500 pt. level!


Alright, so Island of Blood has been out a week or so and people now have a growing horde of Skaven to amass upon the battlefield! But where to start? What are some of the fundamentals? And just how many rats am I going to have to paint to reach 2500? Well that's what we're here today to talk about, so let's dive right in:

Skaven Overview
Skaven are a horde army, if you didn't know this coming in then I weep for you. On average you'll be fielding 200-300 models and should outnumber most any other army you will ever come across- it is in this basic fact where the strength of the army lies. You will always have another unit to throw at something, and as long as you're killing the enemies forces then things are going well- after all, they have a finite number of threats to you while you, on the other hand, being the grand Skaven force have wave after wave of cheap, disposable infantry to throw into the grinder! No threat should be too large were fifty or so rats all charging forth should fail at killing it. Combine this factor with expert war-machines and weapon crews that can reek untold devastation upon the battlefield and you can see clear as day that if you have a properly built Skaven army then no other force should be able to come close to beating you in any way, shape, or form. Ever.

... ... The above would most certainly be true if our army wasn't composed of ramshackle leftovers that barely work at their best and are pressurized crock-pots full of the Old-World equivalent of Moonshine at worst, as well as our individual troops being prone to panic, fear, sudden fainting, and sudden cases of spontaneous, explosive death.

One thing you must grasp when playing Skaven- things will go wrong, and it will probably do so at the most inopportune time, and yes, this may end up costing you games- even if you planned everything perfectly. It's just the nature of Skaven, and if you can't handle that fact then perhaps the High Elves with their perfect poofy-hats are more to your liking. But, if you can handle this fact, even endear yourself to it, hell, maybe even plan for it then you'll find Skaven a flavorful and fun army to field. Just don't go getting your hopes up, it's then especially that you'll be reminded most of your engineer's incompetence.

Ok, so let's get on to some army lists shall we?

For Clan Skryre you have to embody the element of crazy-as-hell war-machines and weapons crews, so we're going to jam as many in the list as we can. Another nice thing I'm going to take advantage of here is Skavenslaves- after all, we need test subjects for our new weapons, and what better thing to do then send a horde of slaves to tie up enemy units in combat and then fire wave after wave of projectiles at it?

The above list mixes a heavy assortment of shooting with almost all the spells from the Skaven Lore of Ruin. The Warlock Engineer will of course get Warp Lightning while the Grey Seer handles the rest, including The Dreaded Thirteenth Spell, common combo of Power Scroll to assist in getting it off and Skalm to treat any issues from the resulting Miscast or lucky shots at him. Initially I also wanted to give him the Shadow Magnet Trinket to give those shooting at his unit (the large Clanrat unit, bell, and Chiefain to give the Seer Ld: 8) a -2, but it had to be cut for points.

Aside from the above we have a large wall of Skavenslaves moving a head of the central army. Basically place the two larger units in front of the main forces and the smaller ones to the flanks. One thing to also make vivid use of are the Musicians, allowing you to reform the massive fifty-man units into 5x10 or 10x5, as the situation warrants.  Usually I would start them 5x10 as not to block any needed movement from the rest of the army and then, when near combat (or even after round one) switch to the 10x5 formation. Either way it gives you a certain tactical viability in it... Even if you're just going to be using the units to tie the enemy up as long as possible as you fire wave after wave of Skryre war-machines into the amassed combat.

So we're now gone the opposite approach from the Clan Skryre list, now we have a melee heavy army with very little in the way of shooting! In addition, we also know all the Skaven Spells of Plague between Lord Skrolt and the two Plague Priests, as well as having two large and unbreakable units with some severe melee power. Overall the above plan is pretty simple, stick Skrold in the 24 man unit, the BSB someplace safe and begin the march forward, throwing down the Storm Banner around your opponent's second shooting phase to minimize casualties as you march forth. Hopefully you've ravaged their line with your spells by now (hitting the trouble units especially with spells such as Wither, my personal favorite Plague spell) and your Monks should be able to trample through by sheer volume of attacks.


-On a side note, even if you, for whatever reason, do not care for the above list, I must say- I love Plague Priests. The state-line, the options, they are truly a fantastic buy for their points and even if you don't wish to go Pestilen heavy or don't adhere to a clan at all they are a fantastic choice to look at! I can't recommend them enough, and that's coming from a Skryre devotee.

This one was a bit tricky, as Moulder has very few actual units in the book, despite being one of the wealthiest clans. Despite that, I've still coupled together this list which swarms your opponents in Rat Ogres and uses Skavenslaves to bulk out it's numbers... And it uses two Hellpit Abominations. Yes, yes, I know some people will cry  "Cheese!" on this one (heh heh...) but really I have two things to say about that: one, it fits the theme of a list that, honestly I think can be scary, but is limiting itself severely to keep a theme going, and two... Man up and just play the game.

This is another one of those lists that may do well or do horribly. To be honest the closest to something like this I've ran would be a Troll themed Warriors of Chaos army, and at least they had Regeneration. Simple concept, stick the Warlord in the five man Rat Ogre unit and run across the table, using the Skavenslaves and Rat Swarms to tie the enemy while more Rat Ogres arrive to smash things up. From a tactical standpoint the army has a lot going against it, on the other hand it's a huge mob of Rat Ogres charging across the table, and that sounds like fun from any standpoint... Well, unless you're on the receiving end I suppose... But really, we're playing Skaven, how much should we care about the Man-Things and the Elf-Things?


*I will note that I do feel some small, three man unit of Rat Ogres would have been beneficial, but we had to work within the restrictions to Special Choices and, despite that Throt allowed two units to be Core Selections, in the end I simply ran out of room and decided that more Rat Ogres would be better in the end. The Skavenslaves are there to make up for the lack of bulk in the army due to the predominance of the smaller six-man units but should serve their purpose accordingly.

~And there you have it readers, several theme lists for Skaven at the 2500 point level representing all major clans! Hope you enjoyed this week's- What? Eshin? What about them...? Aw hell...

...Ahem. As some of you may have noticed, Clan Eshin has not made an appearance with a themed list of their own. The reasoning behind this is simple- while they have dedicated characters in the Assassins (hell, even a special character of their own), a core unit in the Night Runners, and a special in the extremely good Gutter Runners... That's really it, and while you can make a list composed of nothing but the above it won't be very good and you'll find it even more limiting than the Moulder themed list. Now, Eshin can be very powerful, and you can build some lists that adhere to their theme and units, but not in the manor of the above lists, so I can't in right mind include such a list in this article as I'd feel it's to much of a general list and that's not what we're about this week.

Basically, I'll handle Eshin the same way they handle themselves a lot in the fluff and stories, that is they seldom appear in full fighting force on their own. They are sell-swords, they ally themselves with the highest bidder and when the job is done they depart, and perhaps that's how they best used, not as an actual army, but as a highlight to an existing force.

~In the end your army is yours, whether you wish to maintain a Clan theme or make one up yourself the Skaven Army Book allows for all sorts of devious and fun tactics to bring to the table, so get out there and spread some woe in the name of the Horned Rat!
Posted by Mr. Black at 5:55 PM

Email ThisBlogThis!Share to TwitterShare to FacebookShare to Pinterest
Labels: skaven