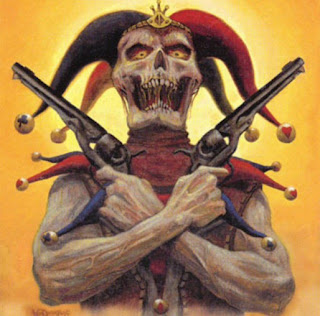 Alright, as I promised the site is going to cover a broader section than just tabletop wargames, to carry through on that promise I'll be giving a weekly summery of our Deadlands: Doomtown RPG game here.

For those who don't know, Deadlands is basically an RPG setting taking place back in the "Gold Rush" days of the 1800s. I couldn't do it justice just giving it a brief summery so here is a wikipedia link: Deadlands

We're basing it off the Deadlands: Doomtown of Bust! setting, which in turn is based off the Doomtown Card Game, which I am a fanatical collector of.

To complicate things a bit further, we're actually using the FATE System for our game, not the one in the standard book. For those who don't know what any of that means, don't worry, it won't effect you. Basically it's just the game system we're using. I won't be bringing it up much for the summaries so don't sweat it.

Anyway... For Session I we worked on creating our characters, which, in order to link everyone together, will be members of The Agency, which is basically the Men in Black for the United States... Pretty much they're the ones in charge of dealing with any supernatural threats to the populous. The group has been assigned to the boomtown of Gomorra because of some strange goings-on that has raised interest.

And thus we have the characters:

Desmond Quinton
Desmond is the group "Mad Scientist" and as such is responsible for creating the technological...um... Weapons... the group has access to. Knowing the player, I expect some shenanigans to take place, as he has pretty much no comprehension of the word "overkill". Basically this guy will be acting as the "Q" to the rest of the groups' "James Bond".


Boom Boom O'Bannon
The demolitions expert of the group. The player made him with the idea of being a heavy explosives expert... Not quite sure what to expect here, aside from the answer to a lot of things being "let's just blow it up". Will have to keep an eye on this character from a GM standpoint as building blowing up can has serious ramifications and the group is supposed to keep their heads down. Who knows what will happen.

Here we have the group sniper... And also the carrier of the worst luck of most anyone in the group. Playing a veteran of The Agency the character had his nose, ears, and tongue cut off during capture and torture by the Confederates, escaping with the help of his partner... and then summarily shooting him for giving secrets away, escape be damned. To add further issue, when he asked for government assistance for the damage he was screwed over by the wife of his former partner, aka the lady also in charge of his claim... Who issued him a deaf seeing eye dog responsible for leading it's former master right into the way of a moving carriage. Basically here we have a person with a seething hatred for the South, silent to the point of mute, and deadly with a rifle.

Lux... I forget the last name...
The resident Huckster/Cardsharp of the group, though even he is not quite sure how his powers work, only that he can subtly manipulate odds and fate around him. Not the most powerful member, he will mainly be playing the role of cataloger for the experiences with the supernatural the group has and acting as a standing support character for the better fighters.


Gordo Sanchez
As constantly described buy the player as a "fat latino" gunslinger Gordo is the group's gunman, and he is a damn good one... He had better be, as The Agency isn't in the habit of hiring out-of-shape borderline-racist who still hold strong ties to their original country. Despite all that though Gordo is full on par for the cause and has a "shoot first, shoot later, then when everybody's dead try to ask some questions" method of fighting. He was brought here for his skill and ability to keep everyone else alive rather than his knowledge of the supernatural.


And that is the group we have going. First actual session is next Tuesday, hopefully things will go smoothly and the group will avoid blowing up most of the town on their first day.
Posted by Mr. Black at 9:13 AM