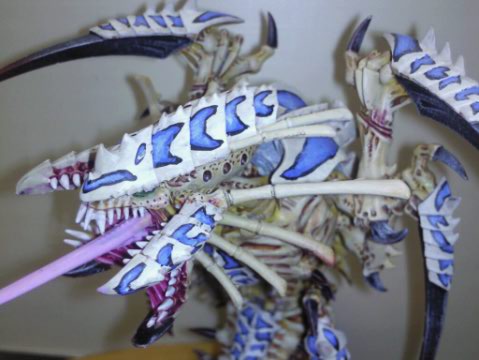 Hive Fleet Ramrod secured a clean victory over the tasty foods that presented themselves in Ard Boyz!


First things first, given another chance, I would have increased the brood of Gargoyles or remove them entirely... My original list, I seem to remember, had twenty, but I cannot for the life of me recall how I did it, so it was a last minute modification.

Other than that, pretty happy with the list overall. The Tyrant allowed me to usually outflank a large unit of Hormagaunts or, in some rare cases (as was my plan against IG) a Tervigon. But really, in the end, that ability wasn't used, to any great effect, outside the first game.

The match-ups were as follows:

The person I played was fairly new to the game and someone I've known for quite some time... But unfortunately this is Ard Boyz, so were I would usually reserve myself, hold back a bit, I had to crush him like bug! He was fielding three units of Devistators, two Missile Launcher one Lascannon... They did the most damage, killing a Tervigon turn one, which was a minor setback... Luckily, Deathleaper and an Outflanking squad of Hormagaunts came in turn two and proceeded to trap two of the units in melee (the Hormagaunts that is) and Deathleaper forced him to take the Dangerous Terrain chance with a squad of Jump Packs in order to come assist the Devistators, where-as normally he would have risked the Difficult Terrain check.

In the end it was a solid win, with one spectator walking by commenting "Oh wow! Tyranids on Tyranids!"... I felt a little bad at that comment... It passed.

Here he got first turn and Turbo-Boosted right in my face... My Hive Tyrant proceeded to then Paraxism one unit and charge into it with a unit of Shrikes and some Termagants. That unit was pretty much taken out...

The other unit though hit me where I had little defense, I sent a unit of Termagants and Warrior Shrikes against them but caused minimal wounds. I lost combat and he was free to move... He proceeded to charge the Tyranid Warriors, causing his Warboss to fully understand the issue with getting hit by Duel Boneswords.... After that, there were some four bikers left, each with a wound. He took the time to retreat after the Hive Guard shot and killed another one... The rest of the game was spent with him running from me as I could not catch him before turn six.... Game ended in a tie, though I controlled all Table Quarters.

This was not a good game for Mr. Murphy as his army had some 40+ KP due to mission scenario... I held my Gargoyles and a unit of Hormagaunts in reserve and by turn two everyone was in melee.... He was playing a Mepheston/Sanguinor list and, unfortunately, Deathleaper only pegged Mepheston with a -1 Ld...

...Buutt turn three Mepheston said hello, and goodbye, to three Warrior Shrikes, who didn't give a damn about his scary Initiative of 1 (Boneswords) or his Toughness of 6 (Toxin Sacs), they did however laugh at his lack of Invulnerable save (Boneswords). The game was stacked against him to begin with and, unfortunately, I just had more guys than he did... A unit of Zoanthropes did, however, tangle up an Honour Guard unit for three turns in melee, before a Trygon charged and killed them all, save the Blood Champion and his Combat Shield! (An awesome moment, I don't care who you are).

In the end, the scenario, and my sheer number of units, just played against him and Hive Fleet Ramrod secured a Massacre Victory.


At this point I was still hesitant about the results, the tie looming over me, but gathering all bonus points did save the day, the final score ended up being Myself with 60 pts and second place with 56. Whew!
Posted by Mr. Black at 7:44 AM