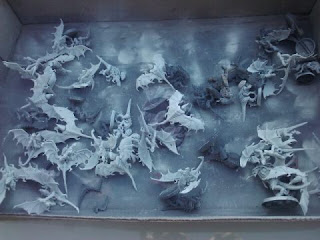 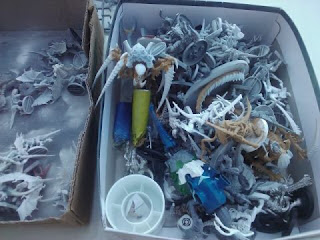 So readers, guess what happened to my Tyranids? A can of faulty White Primer (Armory Brand).

I should have remembered why I don't care for the Armory Brand of primer... Because of the three times this has happened, they have been the culprit all those times...Sigh...
Basically, I primed some 100+ Tyranids... Five minutes later, I realized they looked like I had covered them in snow flock... Upon closer inspection, I saw the primer could be rubbed off with my finger, like a heavy layer of dust.

The can was old, or faulty (I got it from a friend/potential saboteur).

Sadly, it means not only is my painting set back some time, but I must now strip the entire lot of them... Well, article martial I suppose...

Step 1: find a good way to vent if you're stripping them because of an accident.

Next, head out to your local Wal-mart/equivalent and buy the following:

Purple Power is basically Wal-Mart's equivilent of Super Clean (or Simple Green or a myriad of other names).

I prefer Purple Power because A. It's half the cost of Simple Green and B. It's a bit more concentrated (recommends watering it down... don't), so it works a bit faster. And no, don't worry, it won't melt your plastic and it works fantastic on metal.


You will also need a bucket, sizable enough to fit the models in. This can range from a simple cup to a mop bucket in my case.

Step 3: Wait a few days. Ideally they should soak a week, but I have little patience for that and usually find them acceptable after only two-to-three days.

Step 4: Get a tooth brush if that's all you have. I went out and invested in a large scrubbing brush. Basically just brush off the models until they show bare plastic once more. The plastic will have been shaded to a darker hue, I believe this is usually the result of removing Black Primer as some shade of it is ingrained in the plastic now. Whatever the reason, it does not harm the models in any way.


Someone recently suggested a more high tech approach to this as well, which I doubt I will try but found interesting none the less.

Basically, I was told to buy a small fish tank filter, the kind that churns water around so fish, you know, don't die.

He said that if you get one of the waterfall style ones you can create a small tidepool (basically) and just put the models in, the churning of the water will tumble them clean.

In theory, I can see this working similar to a washing machine, but as I said, I doubt I'll try it. I'd love to hear from anyone who went through with similar weird science and the end results.


But basically, that's just a short article on what to do if you find yourself in my situation... Sigh... Back to painting Blood Angels for the time being I suppose...

Stopped by Wal-Mart, got my Purple Power and two dollar containers. Here is the Gant/Hormagaunt/Gargoyle bath... I'll keep you updated...