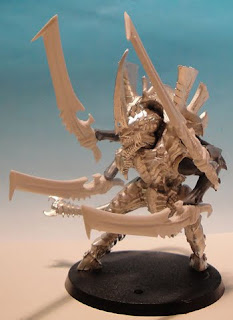 We're looking into a new campaign at the store here, one involving Tyranids, thus my interest in going back and finishing some conversions was rekindled. I had neglected them with the arrival of Blood Angels, as painting Termagants simply took it's toll on me... Now that the spark is back I believe that, while I won't be touching any Gants for a bit, I can still finish up the Tervigon and Tyranid Warrior conversions I had started.

That being said, this here is just a catalog of some of the Boneswords and Lash Whip bits various company have put out... I originally planned to make them on my own, via plasticard, Green Stuff, or whatever else I had around, but some of these where just so nice and affordable I couldn't resist.

These featured below are from http://www.paulsongames.com/resin.html. I personally placed an order for some Boneswords and Whips from this site last night, and will probably head back there to order some more for other projects. 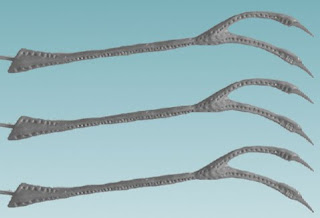 Awaiting for them to come in, should have some WiP later this week... Also have to wait for some Forgeworld wings to come in...
Posted by Mr. Black at 8:20 AM